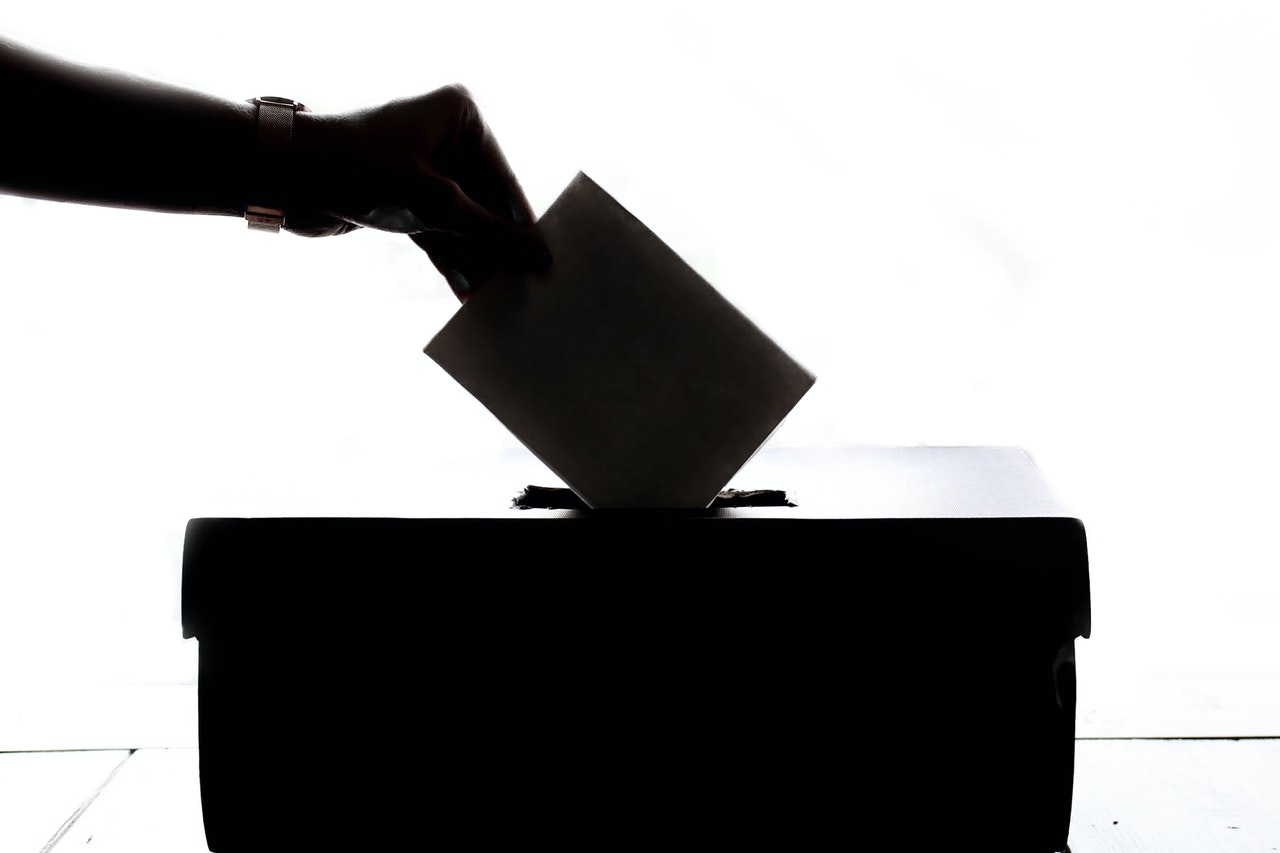 Homelessness and housing affordability is a key issue this election: polling shows 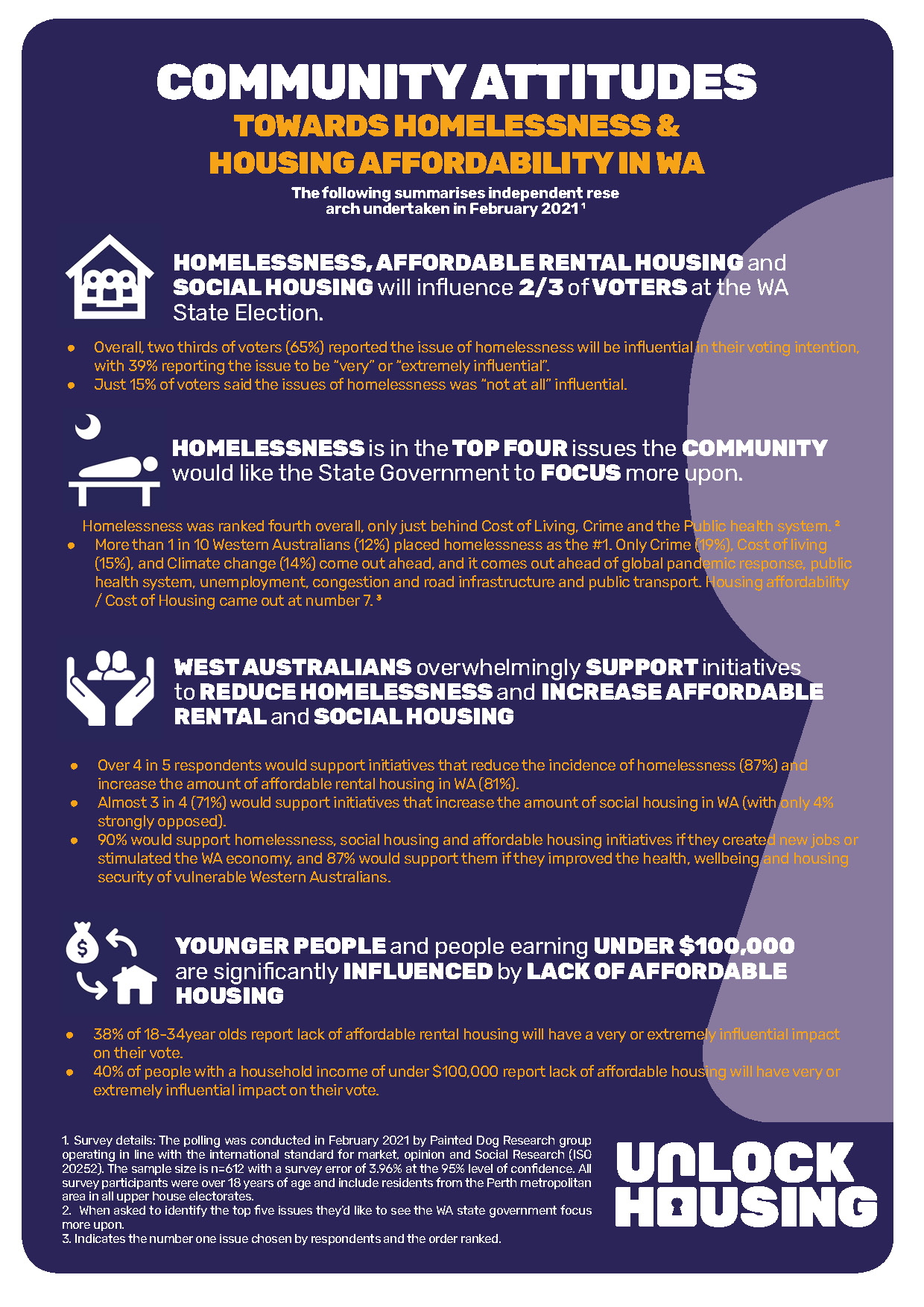 West Australians are overwhelmingly in favour of supporting initiatives to end homelessness and increase affordable rental and social housing, according to new polling results released today by Shelter WA.

Shelter WA CEO Michelle Mackenzie said the findings in polling released today show that the community not only want more of a focus on housing and homelessness, but that these issues will have a strong influence on their vote this election.

“What came through really strongly in the research is the high influence the issues of homelessness and housing affordability will have on voters.”

The results from the Homelessness Community Perceptions found two thirds of voters (65%) reported that the issues of homelessness will be influential in their voting intention.

Over one third of 18–34-year old’s (38%) stated that a lack of affordable rental housing will have a major impact on their vote.

“The polling also shows that homelessness is a top four issue that the community would like the State Government to focus more upon. These findings reflect an increased level of awareness and concern in the community for West Australians experiencing homelessness,” Ms Mackenzie said.

The survey also shows more than 1 in 10 Western Australians (12%) placed homelessness as the #1 issue they would like to see the State Government take more action on.

“The views reflected in this report reflect the strong compassion for people experiencing homelessness building on our previous poll. With many people concerned about rental affordability with the upcoming lifting of the moratorium on rent increase and evictions at the end of March, housing affordability issues are really hitting home.”

“We are also heartened to see the polling found overwhelming support for initiatives to end homelessness and increase rental and social housing,” Ms Mackenzie said.

The survey found 87% of voters would support initiatives that reduce the incidence of homelessness and 81% support the increase the amount of affordable rental housing in WA (81%).  This figure jumped to 90% if these measures create new jobs or stimulated the WA economy.

“COVID-19 showed us the importance of home. Having a place to call home is fundamental to unlocking health, education and economic opportunity. Affordable rental housing, social housing and homelessness issues are becoming increasingly important to voters. The results of this survey reflect that housing affordability issues of concern to Western Australians from all walks of life.

“To end the housing crisis and unlock opportunity, the Unlock Housing campaign has put forward solutions to address housing affordability issues and to end homelessness. At the heart of our strategy is increased investment into social and affordable housing and accelerating the pace of initiatives to end homelessness. Now is the time to tackle this crisis head on. The community is strongly behind it, and the sector are united in our call for action”. Ms Mackenzie concluded.

“We need the same bold leadership and resolve from government if we are to address the housing crises. Investment in social and affordable housing – this will keep all Western Australians safe and strong,” said Ms Mackenzie.

Key Findings of the Polling:

The issues of homelessness, affordable rental housing and social housing will strongly influence around a third of voters at the WA state election.

65% stated the issue homelessness will be influential in their voting intention, with 39% reporting “very” or “extremely influential”

Just 15% of voters said the issues of homelessness was “not at all” influential.

Homelessness is among the top four issues the community would like the State Government to focus more upon.

More than 1 in 10 Western Australians (12%) placed homelessness as their #1 issue. Only crime, cost of living, and climate change come out ahead. Housing affordability as a number one key issue was placed at 7th.

Initiatives that would reduce homelessness and increase affordable rental and social housing are strongly supported.

Support increases even further when the economic and humanitarian benefits are highlighted. 9 in 10 would support homelessness, social housing and affordable housing initiatives if they created new jobs, stimulated the WA economy, and/or improved the health, wellbeing and housing security of vulnerable Western Australians.

Over 9,000 people experience homelessness every day in WA, including 1,000 people who are sleeping rough every night.

Over 420 people are known to be sleeping rough in the Perth and Fremantle regions today.

There is a shortfall of 39,200 social and 19,300 affordable homes across Western Australia to meet current need.

The polling was conducted in February 2021 by Painted Dog Research group operating in line with the international standard for market, opinion and Social Research (ISO 20252). The sample size is n=612 with a survey error of 3.96% at the 95% level of confidence. All survey participants were over 18 years of age and include residents from the Perth metropolitan area in all upper house electorates.

Housing Policy In Australia – A case for system reform